Fellow Hull City AFC fans will be well-aware of our ability to grasp defeat from the clutches of victory, and vice versa.

I was super-confident going into this game, so much so that I put a few quid on a 3-0 victory to Hull City AFC.  It’s been a while since I have expected victory.  A long while.

So shortly after arriving in East Yorkshire’s version of Al-Walkabout-Jazeera, watching the flicking between of the various Premier League games on NBC for 1 second until 10 minutes later our game was showing, with about a 10 minute delay.

I almost felt like chucking it in but I still had 3 quarters of a pint left – by time I had finished we were back in the game at 1-1 thanks to Ramirez.  A decent strike but seemed to take the keeper by surprise with a bit of extra bounce.  My sister informed me of the goal before I saw it, thanks to said time delay.

We went in at half-time at 1-1 but it could have been far different.  Bruce with a fantastic clearance off the line, McGregor with a great near-post save and two penalty-area handballs – both of which were ball-to-hand and shouldn’t have been given against us, but I fancy they would have were Sunderland a big club.

The second-half was as comfortable a performance since Crystal Palace, once Chester nodded in our second.

We didn’t look under threat – Sunderland were fairly toothless and not helped by bringing Altidore on.  Bruce for a change made positive substitutions with both Sagbo and Jelavic coming on towards the end to help us hold the ball up front – as opposed to bringing our forwards off to concede possession and hence goals, such as the Stoke at home game.

Not only did Bruce pick the right team and formation, he also made match-winning substitutions.

One could pick any player for praise, but given that I have questioned his commitment, Ramirez deserves a mention for a good performance, clearly the goal and assist contributed towards our victory but overall I thought his attacking output was very valuable.

So it should be just a case of commenting upon a satisfactory victory, but no the club decided to kick it’s fans in the ankles today by renaming the Facebook page to Hull Tigers. 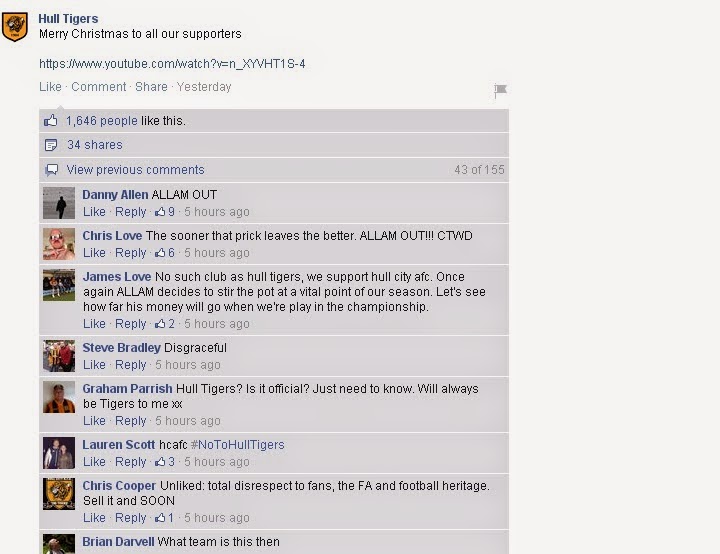 I am sure some fans won’t care too much but it is just another snippet of the total contempt for the fans that this regime has.

Now 841,000 people will either be laughing at us or assuming that they have now been successful in their name-change.

I for one have reported the page to Facebook, for what it is worth, and will be unliking it.

If I had more time I would set up a Hull City AFC Facebook page to copy and paste all official Hull City posts to.
.
Time the blog had a name-change?